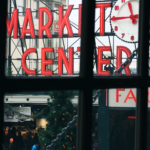 There’s just something special about Christmas in the city.

Downtown Seattle can be a magical place at Christmas, in this article I’m sharing a few of my favorite things to do to celebrate the season in downtown Seattle (and the downtown-adjacent urban Seattle neighborhoods of Pike Place Market and South Lake Union).

While most of the year, urban neighborhoods can feel gray and chaotic, when tree-lined streets glow with twinkling Christmas lights and store windows fill with holiday displays, the city is transformed.

Growing up in rural Kansas, my family would make a pilgrimage to downtown Kansas City- our version of the “big city”- most Decembers. There, the urban sidewalks and storefronts lit up the night and created a cheerful, cozy, and quintessentially Christmas downtown displays. When I moved to Seattle, I was so thrilled to find that the same transformation takes place in downtown Seattle in late November of each year.

City workers spend weeks adding bright white Christmas lights to the trees lining the avenues, and stores and businesses in the downtown area and in Pike Place market transform their storefronts to celebrate the season (with inclusivity of other winter holidays, of course. This is Seattle, after all!)

Here’s my list is can’t-miss Christmas activities for visitors traveling to Seattle around the holiday season:

The Christmas market at Westlake Market

Inspired by Europe’s “Christkindlmarkt” Christmas markets, Westlake Park- a small postage-stamp-sized city park in the heart of Seattle-  is home to a Christmas market of handmade goods.

Westlake Center, where you’ll find the Seattle Monorail’s second (and last!) station, is across the street from Westlake Park. Although Westlake Center is a prime destination for shopping during the holiday season, I love the small makers and creators that pop up in this special market across the street each November. If you’re looking for a great Christmas gift or unique souvenir from your Christmas visit to downtown Seattle, this- (plus them year-round makers market at Pike Place Market) is the place to go.

Although I’ve cavorted through Christmas activities in many Seattle neighborhoods, I still think that Pike Place Market is the place to go to enjoy the Christmas season in Seattle.

Pike Place is filled with Christmas Cheer throughout November and December. It is also host to special events during the holidays. For 2022, Christmas Events in Pike Place Market include:

In fact, I get so excited about visiting and taking tourists to see Pike Place in Christmas that I made an entire article dedicated to things to do in Pike Place Market at Christmas – where you will find my bucket list of must-do activities for your November, December, or January trip to Pike Place Market.

Even locals adore this annual Christmas tradition. Because Seattle is surrounded by so much water – all of it linked through locks and channels- most neighborhoods are adjacent or near a waterfront. So rather than a traditional parade, Seattle hosts a boat parade!

Go see the Macy’s Santa Claus (and get your picture taken!)

Unlike many other cities, however, the Seattle Macy’s generally places Santa Claus front and center in a large window-wrapped portion of the store. After dark (which comes around 4 PM in Seattle at Christmas time!), this window glows with the brightly lit holiday scene inside.

It’s fun to watch from the city sidewalk or you can get great photos of yourself traveling by popping inside to have you or your group’s photograph taken with this Santa Claus.

Go Window Shopping (it’s worth it!)

Although decades have passed since the time period in which ornate Christmas displays in shop windows were commonplace during the holidays, in downtown Seattle this tradition is alive and well!

The Seattle Macy’s and other department stores go all-out- often with elaborate and interactive displays in their windows at Christmas time. (One recent year, pedestrians viewing the Christmas windows from the sidewalk could control the model railroad within through an electronic reader sensing hand movements from the outside of the glass!)

Even smaller retailers join in the fun- and in fact, the Army-Navy Surplus store on the way from Pike Place Market to the Space Needle often has the most stunning Christmas window displays- thanks to a partnership between the store and students from a local design school.

Every December, downtown Seattle hosts a giant Christmas caroling competition called the Great Figgy Pudding Caroling Competition.  This Pike Place Market Food Bank fundraiser becomes a winter festival of its own as the corridors of downtown Seattle fill with carolers – all singing at the same time! In between groups of carolers, you’ll find all the treasures of downtown Seattle at Christmas, food trucks, the Christmas market Westlake Park, and warm drinks.

The Macy’s Sequoia (find it at 4th and Olive) is a live 100-foot-tall tree standing proudly at an intersection in the heart of downtown. This tree, like Seattle itself, has a storied history and a future in question. Affected by climate change and the pollution of its downtown location, this giant city Sequoia – like the orcas in the Puget Sound nearby and like many Seattle residents- struggles to survive in a rapidly changing city.

Historically, this live tree has been ornately decorated each Christmas however Macy’s has indicated this tradition may not continue. (Did you visit and find it decorated? Drop a comment to update below!)

Denny Park (100 Dexter Ave N) is an urban park in South Lake Union between Pike Place market and the space needle, it’s within easy walking distance of either landmark, and in most winters, this urban oasis is transformed into a wintertime fantasy-scape.

Thousands of lights create a dramatic experience for visitors. Although you may have visited lights displays in the past, chances are that they were designed to be viewed from the inside of a car. Thanks to the small urban footprint of this Park and Seattle’s generally temperate climate, this lights display is designed specifically for pedestrians, creating a unique experience. Because it’s in a public space, access to this dramatic Seattle Christmas light display is generally free, although premium activities may include a charge. 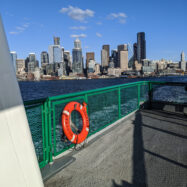 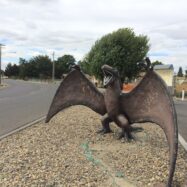 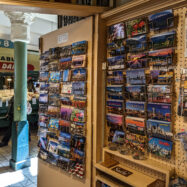 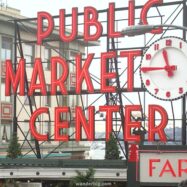