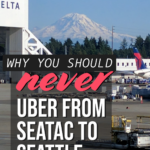 In Seattle, travelers should never Uber from SeaTac Airport to Downtown Seattle because rideshare cars are slower, dirtier, and more frustrating to use than the public transportation options available on the routes between the airport and the city.

Need more reasons? Choosing the light rail train instead of a rideshare from Seatac to Seattle will save you at least $40 (and during heavy traffic or uber “surges” the savings could be $100 or more!). If that’s not enough- the Link Lightrail train is a carbon-neutral transportation option that is powered entirely by wind-generated power (source). Read on to learn more about the easier, faster, and cheaper way to get from SeaTac to Downtown Seattle.

When arriving in most US cities, it makes sense to catch a Uber or rideshare car from the airport to get to a hotel. This is because many cities have not effectively linked their airport to their downtown area with accessible public transportation options that appeal to travelers ranging from business travelers to budget travelers.

In many cities, taking public transportation from the airport to the city center takes longer than an Uber– and for travelers who need to get to a meeting or use every bit of their vacation, public transportation may seem like a ridiculous option. But that’s not the case in Seattle! In Seattle, there is a unique traffic situation: Seattle is a large city on an extremely, relatively, small plot of land.

Making highway travel even more challenging- the Puget Sound and connected waterways slice up the region and require crossing via bridges or ferries.

Because of all of this, traffic in Seattle is some of the worst in the United States.

An efficient, clean, and inexpensive light rail train connecting SeaTac airport to Seattle and beyond. There is absolutely no reason to pay for an Uber and get stuck in traffic for potentially hours when riding the light rail from SeaTac airport is clean, efficient, and (compared to public transportation in other countries), really easy to navigate for travelers and first-time riders.

While I’ve explained in detail how to get from SeaTac airport to Pike Place Market in my article of the same name, in this article I want to focus specifically on why it’s a bad idea to pay for transportation from pay for an Uber from the airport to the urban heart of Seattle.

The cheapest way to get from SeaTac airport to Seattle

By far the cheapest way to get from SeaTac airport to Seattle is using the light rail train. Even if you aren’t particularly budget-conscious, the train is the way to go because it circumvents the horrendous traffic that surrounds SeaTac airport, downtown Seattle, and most points in between. The light rail is easy to ride and the light rail station closest to SeaTac airport is just a five-minute walk through a covered, well-marked, and well-lit walkway that starts at the baggage claim area of SeaTac airport. Once you arrive at the station, you can buy a ticket from an ATM-like ticket kiosks (see a video on using them here)

The cost of an Uber from SeaTac airport to downtown Seattle:

Prices of ubers vary significantly according to surges, but you can expect to spend between $40 and $100 to take an Uber from SeaTac airport to downtown Seattle. Taking the light rail train, however, costs $3.25 and makes the trip in about 40 minutes, even when traffic is heavy. Click here for more information on ticket prices from Sound Transit.

What to expect riding the light rail.

When you board the train at the SeaTac airport, expect to find a train car parked in the SeaTac station. Trains stay parked on the tracks in this destination to allow travelers with luggage to board and settle their luggage into a shelf, seat, or corner. There is limited shelving for suitcases and an area designated for bicycles (which can also be used for luggage as needed).

I recommend keeping your luggage in front of your eyes, rather than stowed on a shelf behind you. Although rates of personal crime are very low in Seattle, theft can and does happen on the light rail. Make sure that, wherever you place your luggage, you can keep an eye on it throughout the whole trip. For less of a headache, I recommend keeping your luggage with you in your seat. This is my preferred method when traveling solo, and is easy to do with my one bag travel style, since it means I can turn on some music, stare out the window, and not have to pay attention to my luggage.

About every 10 minutes, the train will announce a departure and roll out of the SeaTac Airport station.

The light rail trip from the airport to downtown Seattle goes through South Seattle, a part of the city that is filled with murals. If you keep your gaze out the window, you’ll see parts of Seattle that most tourists don’t see.

The light rail goes through a few tunnels, but for the most part remains above ground, predominantly on elevated tracks (although a portion of the route follows street-level tracks through the Columbia City neighborhood of South Seattle).

If it’s your first time riding a light rail train, you might be surprised how quiet the train is as it chugs onward into Seattle. Well, chug is definitely the wrong word since Seattle’s Link Light Rail Trains are powered entirely by electricity produced by wind power. The motion of the train is a gentle glide that provides a comfortable ride for passengers.

The reason I think someone should never take an Uber from SeaTac airport to downtown Seattle is because of the ease of accessibility and affordability of the light rail train. While some might not mind the expensive cost of a Uber from SeaTac to downtown Seattle, if time is money, then surely that Uber ride is one of the most expensive in the world. And why choose an exceedingly expensive Uber route when a more environmentally friendly, faster, and cheaper option is available!

By my calculations, you can save 90% off your Uber from SeaTac airport to downtown Seattle by choosing to ride the light rail train instead. Even after I moved to Seattle and lived for years, by choice, in Seattle without a car, I took many Ubers around the city, but never, ever to SeaTac airport.

My husband and I went to Seattle and just rented a car, and it was fine. I should look into taking public transportation from the airport since it saves a lot of money but it's so hard with how much I pack

I wish more of the US had efficient light rail. We are way behind other countries. Nice to see that Seattle is up to speed!

Is there certain hotels that would be the best to stay in downtown Seattle close to the light rail station, I will be wagging suitcases and don't want to have a long walk doing that.

@LynLi Roman M.A., what is the best(fastest,cheapest) way to get to SeaTac fr Canada Place (cruise ship dock) in Vancouver BC? Does light rail go fr downtown Seattle to downtown Vancouver BC?

While I'm not familiar enough with the hotel situation to answer accurately, I do know that some downtown Seattle hotels offer a free shuttle to and from the lightrail station. The Edgewater is one hotel that does and I highly recommend their bar and restaurant as well.

That is the truth, recently visited Seattle for 2 weeks upon arrival not knowing about the transit system was ushered into a flat rate taxi which was $25 for a 10 min ride. I was upset especially when the taxi driver got stuck in the snow on a hill luckily I was a couple of blocks from destination but he still wanted the full fare even after I tried to help push the car from the street. Beautiful place btw.

I am wondering if I arrive at 11:00PM at night, can I still take light rail train to Downtown?

According to kingcounty.gov, the light rail trains operate from 5 a.m. to 1 a.m. Monday through Saturday and from 6 a.m. to midnight on Sunday and holidays