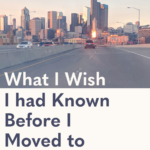 Moving to Seattle was a HUGE life change. Far more disruptive than simply moving from city to city in the midwest, my relocation to Seattle required learning to live in an alien urban landscape, adjusting to new cultural normals, and navigating a world, unlike anything I’d experienced in the midwest.

Now, 6 years later and recently relocated back across the country to an urban cottage in St Louis, I’m ready to share the things I wish someone had told me when I moved to Seattle. As a recently departed Seattlite, I’m ready to spill the details on all my best-kept local secrets.

Downsize Before your Move to Seattle

In Seattle, everything is smaller. Once you cross the Cascade Mountains into the Seattle metro area, lifestyles are surprisingly European in scale.

Gone are spare bedrooms, garages, and even full-sized appliances as the cost of living and demand for space in Seattle dictates that most everyone- except the very wealthy or Boomers who bought in the 70’s- lives on a smaller scale.

So my first step to moving to Seattle was downsizing my stuff.

I knew that to move from a three-bedroom house to a studio apartment would require getting rid of the vast majority of my stuff. So, in my early 30s, I donated, sold, and purged more than 80% of my belongings. When I finally left for my move to Seattle, everything I needed fit in my SUV, and moving into a tiny Seattle apartment was easy-peasy.

Because of my job in Seattle, I had the opportunity to welcome new graduate students to Seattle, from around the country, each fall. One of the most common mistakes (and regrets!) for many of these newly arrived Seattle transplants was overpacking for their move.

So many people new to Seattle brought their entire average-size home and discovered, after all the effort and expense of moving, that their belongings really just made their home cluttered and difficult to navigate.

Sell or “Shrink” Your Car Before Moving

Guys, I moved to Seattle with a Cadillac Escalade. I never blog with emojis but I just have to drop a 🤦🏻‍♀️ here. Learn from my fail: do NOT move to Seattle with a large vehicle. Why? Similar to above. It’s a HUGE headache.

Because apartments and houses have premium prices, more land is developed. Because more land is developed, less land is used for parking lots. Because there are no parking lots, the only option in many cases is (paid) parallel parking- and because so many people are trying to find a parking space, the spaces you’ll find open (after circling the block a few times) will usually be tiny.

To be honest, I never really thought of parking of the privilege. Parking spaces, I thought were the responsibility of businesses to provide their customers and an absolute bare minimum provision for any sort of housing. I learned quickly after I moved that this was not the case in Seattle. In Seattle, parking spots are expensive, hard to come by, and significantly smaller than parking spaces in the Midwest. I didn’t expect owning a car to be so expensive in Seattle – let alone parking it! As I adjusted to life in Seattle, I realized very quickly that my oversized SUV combined with my terrible parallel parking skills meant that I needed to find a new car or simply say goodbye to the one I had.

While I tried to keep my car briefly, it was impossible to parallel park in Seattle, difficult to park in parking garages, and a magnet for break-ins in commuter parking lots and the kind of remote parking spots I would resort to in order to find a spot that fit. After a few months in Seattle, I decided to sell my car. The problem? No one else wanted a giant car in Seattle either! Ultimately, I paid to ship my Escalade to Dallas, TX to be sold there.

Living without a car in Seattle in the days after the sale of my car, though, was bliss. After the headache of my SUV, I relished never having to stress about expensive and difficult parking as I instead, navigated the city by foot, bus, and rideshare. I liked it enough that I wrote a guide to navigating Seattle without a car.

What to expect owning a car in Seattle:

The thing to know about security in Seattle is that while personal crime is rare, the property crime rate is extremely high. In other words, while your chances are decent of having your car broken into more than once per year, you’re far less likely to be mugged or assaulted than in many American cities

Although just like in any city it’s important to remain aware of your surroundings, most neighborhoods in Seattle are safe to walk around in at night.

What to Know about Apartments in Seattle

There are hundreds of brand new apartment complexes in Seattle and most of them are trash. Honestly. The high rental prices in Seattle offer landlords a higher profit than many regions, and that has driven the apartment rental industry directly into the jaws of corporate America.

As an alternative, recent changes to local law in Seattle made it much easier for individual homeowners to rent out basement apartments, guesthouses, and mother-in-law units. Many of these homes are in premium locations with gardens and waterfront views, offering something corporate rentals cannot.

How to Snag a Great Apartment in Seattle:

Culture Shock: What to Know about Moving to Seattle

Population density: Honestly, when I moved to Seattle one of the most difficult things for me psychologically was adapting to the compressed way that so many people have adapted to living in such a small geographical area. For the first few months, I felt clastrophobic due to missing the wide open horizons of the midwest.

Hospitality: It was a psychologically difficult thing to adapt to the closed-off-ness of Seattlites. In Seattle, it’s jokingly referred to as the “Seattle Freeze,” but if you are a southern or midwest transplat moving to Seattle, it may not feel like something to joke about.

If you’re used to smiles and hello’s being returned as you pass a stranger on the sidewalk, you’ll probably feel rejection as you find your friendliness ignored or even percieved as a violation by Seattlies. Sadly, this was something I got used it and one of my favoirte things about moving from Seattle to Saint Louis.

To cope with culture shock, know how to decompress.

As a Midwest transplant the Seattle Freeze is true. No comment on downsizing, housing and cars as I'm in the burbs with mountain and lake views. Also, the outdoors which is HUGE plus (mountains, shores, sealife, etc etc etc) & the clean fresh air.