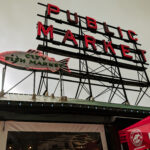 Learn how to get from your arrival gate at SeaTac Airport to the iconic entry of Pike Place Market with this simple route guide- including tips for navigating Seattle’s public transportation.

The first time I visited Seattle was a bit of an off-center visit. My travel didn’t take me into the city center but I found myself, just south of SeaTac airport in a boutique hotel only steps away from the light rail station. With almost the entire day to kill, I debated taking the light rail into downtown Seattle to see the famous Pike Place Market, but ultimately I was too intimidated to try navigating Seattle’s light rail to Pike Place market. The next morning, I left on my flight without having seen the gem of Seattle’s historic downtown, and with a few pangs of regret.

Since then, I’ve moved to Seattle and become an expert at navigating Seattle without a car. Read on to learn how easy this route actually is.

I’ve lived in Pike Place market for several years now. A few months after signing a lease on a tiny studio apartment in the Pike Place neighborhood, I sold my car. For the next three years, I navigated life in downtown Seattle without a car, including frequent trips in and out of the city via SeaTac airport.

Although I was lucky to be able to afford rideshare transportation some of the time, I never used it to get from the airport to my home in the Pike Place Market neighborhood. Why?

Best, easiest, fastest, and cheapest way to get from SeaTac to Pike Place: Light Rail Train

Seattle has invested heavily in its light rail network, and although the network is not yet complex (there’s just one line running north to south) the original light rail was designed specifically to carry passengers from SeaTac airport to Pike Place Market-adjacent downtown.

It almost couldn’t be easier to take the light rail from SeaTac to Pike Place market: from SeaTac arrivals travelers just need to head to baggage claim and then follow the signs to a walkway that leads directly to an airport-adjacent light rail station.

Follow the walkway to a station where an ATM-like kiosk offers visitors the chance to purchase a ticket on the light rail for about three dollars. Once you have a ticket, scan your ticket downstairs, and head upstairs to the platform where trains are typically waiting for you to board a train. Don’t worry, there’s no way to catch the wrong train from the station – all light rail trains leaving the SeaTac airport station are headed north. The trains will indicate that they are headed to the University of Washington (or possibly “Northgate” now that a new more-northern station is coming online) but don’t worry, all of these trains will stop just a few blocks uphill from Pike Place market.

Once you’ve boarded the light rail, stay on board for 11 stops (about 30 minutes) and get off at University Street Station. When you emerge from the underground university station, look for the waterfront and head in that direction. The most iconic entry point to Pike Place Market is located at 1st Avenue & Pike Street.

Getting from SeaTac to Pike Place Market by Public Bus:

A second option to get from the Seattle-Tacoma Airport to Pike Place Market is to use another form of public transportation: a good old-fashioned city bus. But the buses in Seattle are anything but old-fashioned – these electric-powered buses have a neutral carbon footprint, making them an excellent choice for energy-conscious travelers.

To take a bus from SeaTac to Pike Place market will require one bus transfer and about 1-1.5 hour transit time. It’s slower and more complicated than taking the light rail because public transportation planners know that the light rail is designed to get passengers from the airport to Pike Place. If you’d prefer the bus to the train, here’s how to get to Pike Place:

You’ll need to have 3 to 4 dollars available in dollar bills to pay the bus fare, which spikes during peak hours.

Walk from SeaTac to a bus stop

From SeaTac arrivals walk to International Blvd & S 176th St, where you’ll find the stop for the northbound “A Line” pay your fair and be sure to collect a pass from the bus driver that will allow you to transfer buses at the next stop at no charge.

Get off at Tukwila International Blvd Station

Board the 124 to Downtown Seattle

Board the 124 “Downtown Seattle Georgetown” Bus. Stay on the bus for 42 stops (you’ll see a lot of south Seattle up close!) and exit the bus at 3rd Ave & Union St

When your bus reaches 3rd Ave & Union St, you’re almost to Pike Place Market! A short walk, about .2 mile will deliver you to the doorstep- and the iconic view of Public Market sign – of Pike Place Market.

Bus routes may change, always confirm the current recommended route with Google maps or one bus away. To download this route map click here. 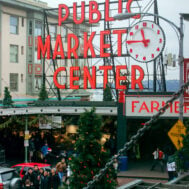 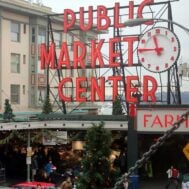 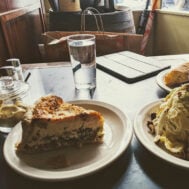 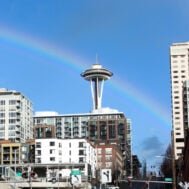 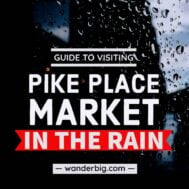 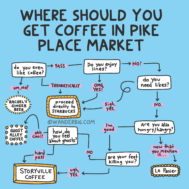 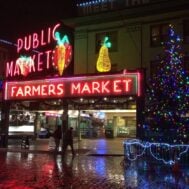 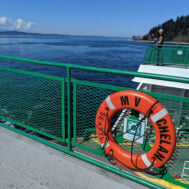