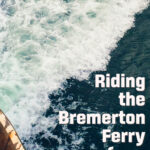 While the most popular ferry from Seattle is the Bainbridge Island ferry, it’s not the only ferry that leaves from the city. The Bremerton Ferry also leaves from downtown Seattle, and passengers aboard this ferry can enjoy nearly 2 hours cruising the waters of the Puget Sound for less than $10.

In this post, you’ll learn everything you need to know about riding the Seattle to Bremerton ferry, and reasons why you might want to check out the ferry to Bremerton on your next trip to Seattle, Washington.

Where to Board: Like the Bainbridge Ferry, the Bremerton Ferry leaves from Seattle’s urban port called the Downtown Seattle Ferry Terminal at 801 Alaskan Way, Seattle, WA 98104).

What it costs to ride the Bremerton Ferry: Walk-on passengers riding the ferry from Seattle to Bremerton without a car pay just under $10 for the 60-minute crossing (but the ride back is completely free for passengers without a vehicle!)

How often does the Bremerton Ferry leave? The Bremerton ferry leaves from downtown Seattle about every 2 to 2.5 hours during the day- though the gaps can be irregular. Always check the Official Bremerton/Seattle Ferry schedule before heading to the ferry terminal.

How long does the Bremerton Ferry take? It takes 50-60 minutes to travel from dock to dock on the Bremerton ferry. For foot passengers seeking a faster option, the Bremerton Fast Ferry (a passenger-only ferry) navigates this route in just 30 minutes. The fast ferry leaves about every 30-60 minutes from Pier 54 in downtown Seattle.

Commuting to Seattle on the Bremerton Ferry

Despite the long commute, many people are willing to make this pilgrimage in exchange for the more affordable and more spacious housing on the western side of the Puget Sound in Bremerton. To keep costs down, many people commute to work on foot, and navigate Seattle without a car once they arrive in the city.

Traveling between Seattle and the Naval Base Kitsap in Bremerton

The US military has bases strategically placed in the Pacific Northwest, and Bremerton’s Naval Base Kitsap is a prime example of this. Soldiers, contractors, and family and friends visiting all frequently use the ferry as a way to get to and from Naval Base Kitsap from Seattle – it is also the easiest way to get to Bremerton without from SeaTac without a car write more about that.

Public Transportation between Seattle-Tacoma International Airport and Naval Base Kitsap

While driving around the Puget Sound from SeaTac to Bremerton’s Navy Base takes about as long as navigating by ferry, if you’re using public transportation you’ll definitely need to cross the Puget Sound on the Bremerton Ferry. Getting from SeaTac Airport to Naval Base Kitsap via public transportation always pulls up this Google maps route, including a ferry ride, as the fastest option.

Although tourists are less common on the Bremerton ferry compared to the more popular ferry to tourist-friendly Bainbridge Island, the Bremerton ferry is an excellent value for tourists and is an especially good vacation choice for travelers with limited mobility for reasons that I discuss here in more detail.

The Bremerton ferry is ideal for tourists who want to spend more time on open water and less time on foot – since Bainbridge Island, with its quaint shops and quiet waterfront, can be a boring destination for adventure-seeking tourists. The Bremerton ferry offers an alternative: about two hours on the open waters of the Puget Sound for the same price as the 1 hour and 10 minute round trip to and from Bainbridge Island.

What Ferries Go to Bremerton

At the time of the latest update to this post, the ferry that the Washington state ferry system uses on the route between Seattle and Bremerton is the vessel M/V Chimacum, a diesel propelled “Olympic Class” 362-foot long ferry- one of the largest in the WSF fleet.

The ferry used on the day of your sailing, however, may be different. You can learn in advance which vessel will be operating during your trip by navigating to the schedule for this route and clicking on the name of the ship shown in the schedule under “vessel”. The ship name is always a hyperlink leading to a page that tells you more about the particular vessel that’s active.

The Washington State Ferry system is slowly working to transition to a fleet entirely powered by green energy, so as these newer ferries come into service, expect changes in boats.

When I initially moved to the Pacific Northwest and began riding ferries as part of my regular commute around the area, I was concerned about riding ferries in poor weather. The winds in Seattle can be very strong, especially in the fall.

I soon learned that these ships are more than equipped to withstand the wind and waves of the Puget Sound. See, the Puget Sound – even though it can appear wild at times – is really more like a small inland sea (technically, it is a sea- part of the larger Salish Sea that stretches into Canadian waters) because of this, the wind and waves never get as aggressive as they do in truly open sea, which means that the giant industrial ships of the Washington State Ferry system are more than capable of handling the waves and high winds of the Puget Sound.

On the rare occasion of truly extreme weather, some ferries may be grounded or delayed, but this is highly unusual.

More commonly, Washington state ferries are canceled, delayed, or grounded due to low tide. When extremely low tides come, some ferry docks in Washington state have to close due to the normally deep harbors becoming temporarily too shallow to safely dock large vessels. The good news is that low tide closures do not affect the Seattle to Bremerton ferry due to the natural depth of the Bremerton Harbor.

While I adore Bainbridge Island and recommend that any traveler planning how many days to spend in Seattle, schedules time to take a trip to the island, it’s not for everyone.

Visiting Bainbridge requires a lot of walking, and most things to do there involve eating, shopping, or eating while shopping. If that’s not your travel style – or if walking long distances is difficult or painful- you may still want the experience of taking a Washington state ferry. If this is the case, the Bremerton ferry is a great value and offers the same – and more – sweeping views of the Seattle skyline, the Olympic Mountains, and the Puget Sound.

Can you Take the Bremerton Ferry without a Car?

You don’t have to have a car to ride on the car ferry from downtown Seattle to Bremerton. While many people associate ferries with a form of transporting cars, Washington state ferries are also a popular form of pedestrian transportation.

When you purchase a ticket for the Bremerton ferry from the passenger terminal, you’ll purchase a walk-on passenger fare which is significantly less expensive than paying for a vehicle to be loaded, transported, and unloaded.

Washington state ferries are generally very accommodating to walk-on passengers. With a snack bar and decks on various levels to enjoy the ride and take photos, riding the Bremerton ferry without a car is easy and fun.

Things to Do on the Ferry Between Seattle and Bremerton

Look Out the Window

On this hour-long trip across the Puget Sound, you’ll be tempted to relax and play on your phone, but you just might miss out on something magical! My one and only whale sighting from when I lived in the Puget Sound area was spotted from the passenger cabin of a Bremerton-bound ferry.

While all the other passengers were absorbed in laptops, tablets, and phones, I was staring out the window dreamily. It was then that I saw a black arc rise out of the water and, lifting up after it, that signature split tail of a whale.

Astounded by what I’d seen, I searched the cabin for faces that had also seen what I just saw, but no one else was even looking up! It was this experience that reminded me just how much there is to see when we pay attention when no one else does.

Work on the Commuter Puzzle.

If it’s dark, if the waters are choppy, if if you’re just not in the mood to watch for a whale sighting, prowl the passenger cabin for a puzzle in progress.

One fun thing about this commuter route is that throughout the day, people will leave half-finished puzzles behind. Commuters take turns adding pieces and completing the jigsaw puzzle during their transit between Seattle and Bremerton.

Check out the Snack Bar

After a recent buyout, the Washington state ferries – especially the large ones like the Seattle to Bremerton ferry- feature large cafeteria-like snack bars where you can purchase coffee, snacks, hot grill items, and even alcoholic beverages like beer and wine.

If it’s your first time on a ferry, you might be curious about how they work. Because the Washington state ferries on this route are so large there’s plenty to explore while still staying in open access areas.

You can go up to the highest deck for the best view, or down to empty car decks, which can feel like liminal spaces when empty or traversing the Puget Sound after dark. (Yes, unlike some international ferries, you are permitted to go down to the car deck while the ferry is in transit – even if you have not brought a car on board).

Watch the Skyline as you Leave Seattle

Just like the Bainbridge ferry, which leaves from the same Seattle ferry terminal, the skyline of Seattle as seen from the deck of a departing ferry is incredible. Don’t be in too much of a hurry to rush onto the ferry and get a spot at the front of the departing ferry- at the beginning of the ride, the back deck is a prime spot for photos.

Have a Birthday Party or Spread Some Ashes

While I say this a bit tongue-in-cheek, the fact is that both of these activities are so common that the Washington State Department of Transportation addresses both activities on the guest activities section of their website!

It turns out, you can spread a loved one’s actions from a Washington state ferry, but only with preapproval, when the weather is just right, and the ferry’s captain signs off. And if your birthday travel plans include crossing the sound on a ferry? Well, bring friends and celebrate with the crew and passengers!

Are there bathrooms on the Bremerton ferry?

How does the Bremerton Ferry Dock

The Bremerton ferry docks about 50 minutes after departure, and only needs about 15 minutes to empty cars and passengers, reload, and depart for the port at the other end – Washington state ferries are incredibly efficient at unloading and loading passengers and cutting down on time spent at docks.

In fact, these ferries spend so little time at the dock that the engines never fully turn off and the boat is never fully secured to the dock – instead, motors continue while the ferry is docked. Turbines move water to keep each ferry securely pressed forward against the dock, while cars load and unload. When the loading process is complete, engines on the opposite end of the ferry are engaged and the ferry takes off for its destination.