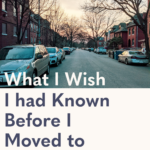 In 2021 I made a major life decision and relocated from Seattle to St Louis. Like moving to Seattle 6 years earlier, it was a complex move that shifted my lifestyle significantly. In this article, I share a little bit about what it was like to move to Saint Louis, what surprised me about moving to St. Louis, and the hardest parts about the transition.

Why I Decide to Move to Saint Louis:

Long before everyone else went online in 2020, I was a digital nomad working without an office. While some digital nomads are true nomads that don’t have permanent homes. I found, after 6 months of traveling this way, that having a home to come home to was an important part of maintaining my mental health while traveling.  Knowing this, I couldn’t justify calling Seattle- one of America’s most expensive cities- home. After evaluating a shortlist of cities that I was initially interested in moving to, I chose St. Louis.

Cost of living: As a nearly full-time traveler, I reasoned, financially it just made more sense to maintain a home in a city with a very low cost of living – since I spend so little of my time at home.

Aesthetic: St Louis has a vibe, and while it’s not right for everyone the endless historical districts blended with urban decay was inspiring to my artist-self

Social Activism: I believe deeply in doing my personal work to become more antiracist and also in doing that on behalf of the community.  Saint Louis, gave me the opportunity to move into an urban neighborhood (without displacing a low-income family) to pay local taxes, vote, and volunteer for community events- things that strengthen neighborhoods.

Here’s my story of what it was like to move to St. Louis from Seattle.

Like Seattle and every other large city, St. Louis has a huge variety of neighborhoods all with a different social makeup, aesthetic, and vibe. While Seattle ranks high on the list of cities with mixed-income residents living in the same neighborhoods, the same is not true for St. Louis. In St. Louis, the divide between low-income, moderate-income, and high-income neighborhoods are stark- often with city-placed barriers literally blocking roads as they move from lower to higher income neighborhoods.

Although there are multiple neighborhoods in St. Louis, the primary division is between St Louis city and St Louis county. Where political positions and income division couldn’t be more obvious. While the wealthy suburb-packed St Louis County has better city services, St Louis City city struggles financially from the effects of white flight. After years of population decline and corrupt tax city tax management, St. Louis City struggles to maintain the existing roads and utilities.

When I moved to St. Louis I was delighted to discover a wide variety of regional foods – something that Seattle lacked. In St. Louis, I found a particularly divisive regional pizza, toasted ravioli, something called the St. Paul sandwich, and amazing barbecue. Even after the challenges of 2021, the restaurant culture thrives in St. Louis.

St Louis has a variety of regional-American and international restaurants, but not as many options for Asian food. For example, while Saint Louis is home to more Bosnian Food restaurants and Eastern European cuisine, it’s been hard to find Korean, Filipino, or Seattle’s beloved Hawaiian dish poke.

After having literally sold my car for a few years to live without a car in Seattle,

Driving after I moved to St. Louis was jarring.

I know that every single city claims they have the worst drivers but, listen, St. Louis is something else.

In St. Louis, there is virtually no enforcement of traffic laws. Over time, this has normalized cars running red lights, blowing through stoplights, making illegal turns, and reckless speeding on both highways and quiet residential streets. Similarly, hit and run accidents happen constantly- with little to no criminal penalties even when caught on dashcams.

If you move to St Louis, expect to navigate harrowing traffic and higher risk of a car accident. When I moved to St. Louis I had a dependable car that was about 10 years old. I anticipated keeping this car for a few more years but after a few months in the city I decided to trade it in for a car with a higher safety rating. I realized in those months that, as I commuted on highways with a 55mph speed limit but a standard rate of traffic closer to 75 mph, that my risk of being in a serious accident was much higher once I moved to St Louis.

Because of this, even though I technically lived in a much lower cost of living city, I felt like I had little choice but to splurge on a relatively new vehicle with enhanced safety features. I also adjusted my car insurance coverage to have a very low deductible- expecting, almost inevitably, the car would be hit, stolen, or vandalized.

After living for a few years in a seedier part of downtown Seattle, I thought I was prepared for living in an urban neighborhood in St. Louis, but I learned when I moved to St. Louis that crime is a little different in St. Louis.

While in Seattle, and many urban areas, personal crime is primarily limited to high-risk neighborhoods, times of day, and activities (i.e. criminal activities) that feels less true in St. Louis, where gunshots echoing in urban neighborhoods in mid-day is unfortunately very common.

Things I love about St. Louis

The Arts and Music of Saint Louis

Although there are certainly cities known for having a better art or live music scene, St. Louis and low-cost-of-living cities like it are full of budding young artists and novice creators.

Why? Well, in high cost of living cities like New York, LA, or Seattle, a person really has to be at a professional level before they can afford or justify a studio to practice their craft. In St Louis, however, that’s not the case. Not only are a lot of people able to have creative spaces in their homes, but Saint Louis has countless creative businesses and businesses that support creativity.

As a person interested in many creative hobbies, Saint Louis is a great fit. While in Seattle I was always on the lookout for a pottery class under $400, in St. Louis I have my pick of four different studios within a few minute’s drive from my home! Creative spaces and hobby clubs abound, because of the drip-down effect of a lower cost of living. While in high cost of living cities, people often have to have second jobs and a side hustle to afford rent, low cost of living cities make downtime, leisure, and creative pursuits in reach for everyone.

I’m not exaggerating when I say that architecture in St. Louis is one of the things that moved to the city from my shortlist of potential cities to my final decision. One of the best parts of moving to St. Louis is enjoying the city’s stunning and seemingly endless historical neighborhoods. Historical districts in Saint Louis are so plentiful that you can drive for miles and still be surrounded by old buildings- and most of these buildings have been – or are in the process of being – renovated to be enjoyed for years to come.

As of this writing, I’m a homeowner of a small cottage in an urban neighborhood in Saint Louis. While the challenges of living in Saint Louis were bigger than I expected, it’s a decision I feel good about. I’m proud to call this city home and look forward to many adventures with Saint Louis as my home to return to.