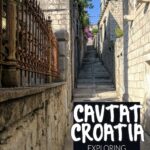 Read on to learn why Cavtat, Croatia is one of my all-time favorite solo travel destinations.

After my trip to Bosnia, I returned to Croatia’s coast pretty weary. By the time I arrived via a Croatian bus at Dubrovnik’s bus station, I was ready to crash.

The 7-hour bus ride with three border crossings and 1 (yes, 1!) bathroom stop left me so dehydrated I’m certain minor organs in my body were beginning to shut down by the time we reached the coast. So when my bus rolled into Dubrovnik in the late afternoon, I may have cursed myself a little for booking lodging that was  20 minutes away by Uber.

Thankfully, Uber does operate in Croatia so transportation from the Port of Dubrovnik (adjacent to the inter-city bus station in Dubrovnik) to lodging in Cavtat was quick and door-to-door.

I picked Cavtat to stay because of the rumors of Dubrovnik’s swelled-to-overflowing capacity in summer months recently. Cavtat, a local assured me, had much of the same offerings as Dubrovnik, but with fewer people, more accessible beaches, and a lower price tag. As a bonus- Dubrovnik itself was a short commute away- provided by water taxis with affordable prices and breathtaking views. My Google Fi coverage was consistent throughout even the rural areas of Croatia so exploring out from primary tourism hubs felt like adventures I could handle.

I loved Cavtat for its gorgeous cove-like harbor, hiking, and old-town. The old part of Cavtat was equally as enthralling as Dubrovnik’s, but had the quiet stillness of a residential neighborhood rather than the thick tourist crowds I met constantly while exploring Dubrovnik.

Indeed, while exploring the old town in Cavtat I often found myself entirely alone, even in the height of tourist season, which made for enthralling photos of the ancient limestone steps and structures.

Getting Between Dubrovnik and Cavtat by Water Taxi

Perhaps one of the best-kept secrets of Cavtat is the harbor-to-harbor boat service available to help visitors and locals alike hop between Cavtat, Mlini, Dubrovnik, and Lokrum Island.

I was able to pop between these ports in these comfortable passenger boats for just a few USD- much less than the cost of Ubering along the coastal highway!

This method of transportation was my favorite, since instead of highway views of construction and housing developments, the Croatian water taxis sped up the coast, giving passengers a 360 degree view of the amazing coastline of Croatia.

The transfer boats also run to Lokrum Island and back for only about $3 USD more than the cost to travel to Cavtat from Dubrovnik.

If you plan to visit Lokrum during a Dubrovnik adventure, consider booking lodging in Cavtat to avoid the crowds and inflated pricetag of Cavtat’s trendy next door neighbor.

Dubrovnik is famous for their old harbor- made iconic through HBO’s use of it as a filming location. While Cavtat’s harbor is less majestic, it’s also less crowded. While Dubrovnik’s old harbor is a constant water-bound traffic jam of tourist boats and cruise ship tender boats ferrying passengers from the massive ships idling off-shore, Cavtat’s harbor is different.

Far from the noise and chaos of the busy, compact port of Dubrovnik, Cavtat’s port stretches along a long section of waterfront where tree-lined walkways give way to sidewalk cafes and shop. Without the tourism boats, Cavtat’s harbor is serene and peaceful.