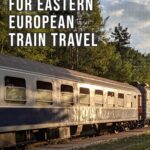 Traveling by train is one of the best ways to see Romania, although actually a less-popular mode of travel for locals. The Romanian rail system has a reputation for being unreliable and very slow.

This reputation has led most Romanian citizens to abandon train travel entirely, resulting in low operating budgets and even rarer upgrades. Despite all of this, my experience navigating Romania by train was mostly positive.

By taking the rail system, and even learning how to take advantage of its eccentricities, I saw more of the Romanian countryside and created many of the memories that will define that trip in my mind.

Why you should give trains a shot on your Eastern Europe trip:

A first-class ticket from Timisoara in western Romania to Bucharest in the east costs less than an Uber from my home to my office in Seattle!

Sometimes the train tracks follow highways, though often they diverge to make cut new routes through farmlands and forest.  The train tracks, being built a little higher up, include more sweeping views.

The slow speed of Romanian trains can be frustrating, but if you prepare in advance, it can be a plus. As trains roll through the diverse landscapes of Romania, you have time to appreciate the view and even snap some great photos from the train. (Many cars have windows that open wide and unobstructed by screens- perfect for photography)

Slower speed gives you a chance to just sit and look out the window- a welcome reprieve from all the stress of full-time travel.

5. Work while you are in transit

Seating on most Romanian trains, especially in the Western part of the country- includes tables. Though the ride may be bumpy, it’s easy to type or sketch out drafts for work.

6. Space to stretch out

Unlike buses or shared transit which can be very crowded as customers are squeezed in like sardines, 80% to 90% of the trains in Romania run less than half-full, meaning you may have an entire train car to yourself on some trips.

Why NOT to travel by train in Romania:

Consider the following before planning a trip around Romanian travel by train:

1. Pace – as already covered the pace of trains is very slow in Romania.

3. Really Gross Bathrooms – Romanian train bathrooms are, I can say with confidence as a traveler to many countries and continents, the worst bathrooms I’ve ever used in my entire life. (pro tip: always use the restroom at a station before boarding, always carry wet wipes, and always carry a bit of toilet paper)

4. General Cleanliness – be aware that the cleanliness of bathrooms, seats, tables, and windows in Romanian trains tends to not be up to the standards of Western European countries.

Who shouldn’t take the train?

– Travelers with mobility issues. If you’re a traveler who would have difficulty getting yourself and your luggage up and down big steps (like getting on a train without a platform) Romanian train travel may not be for you just yet.

– Travelers on a tight schedule or brief itinerary. Romanian train travel is slow, like really slow, like spend the better part of a day getting somewhere that could be driven in three hours kind of slow. This kind of slowing down can feel like a relief to weary travelers on the road for months at a time, but if you only have a few days to see Romania and/or Transylvania, train travel is probably not the way to go.

Tips for having a great trip on the Romanian rail system

1. Track your trip via GPS.

Instead, you need to study in advance where you’re going and pay attention to GPS as you approach. (Screenshot the list of stations, in order, that you’ll pass on your trip via Rome2Rio as a reference for this information- do not trust your phone will load data in rural Romania)

This is always good travel advice, but never more than on the Romanian train system. Expect that you will be hot or cold, and be prepared to adapt.

The following section may contain affiliate links. As an Amazon Associate, we earn from qualifying purchases.

Even though the whole train car may be empty, the seat before you may be filthy, and your feet may be aching, it’s a major faux pas in Eastern Europe to put your feet up on the seat of another chair.

Small packages of baby wipes are plentiful and inexpensive in Romania – find them near the checkout of any grocery or convenience store. Always helpful for travelers, these wipes are especially great for using liberally on Eastern European trains.

Once you choose a seat, you can wipe down the table in front of you and the window. Train windows are often so dirty that visibility is limited, but a quick wipe down can make your views that much better.  I usually head out on a trip with a 12 or 20-pack of the large-sized Wet Ones, then replace it with a local brand when I run out.

Seating is usually at liberty. Pay attention to your ticket or ask at the ticketing counter, but typically if you are riding the state-owned rail system there are no assigned seats onboard the train. There may be first-class and second-class seating but within the sections, you are usually free to sit wherever you would like.

Even if you are assigned a seat, as long as the train is mostly empty and the seat you have chosen has not been sold, conductors are unlikely to ask you to move.

6. Pack your own drinks, meals, and snacks

Trains on the state-run line (CFR) in Romania do not have restaurant cars or even vending machines. Plan to bring your own drinks and snacks or pick up a meal at a restaurant before leaving the train station.

When I learned my way around the Eastern European rail system in Summer-Fall of 2019, I arrived during an intense heatwave. Trains, though supposedly air-conditioned, (and perhaps slightly so) were stifling.

I began freezing water bottles in my Airbnb the night before a trip so I could place one behind my neck, the small of my back, next to my packed lunch, etc.